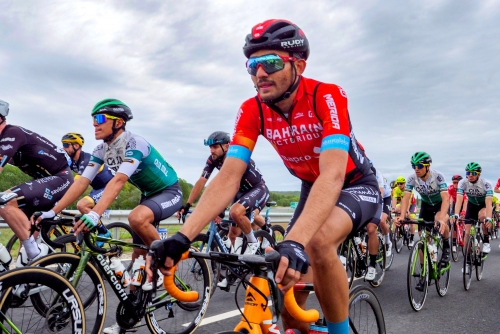 Bahraini cyclist Ahmed Madan is set to be part of a six-member squad for Team Bahrain Victorious competing in the 43rd edition of Tour de Hongrie.

The professional road cycling event, which is part of the 2022 Union Cycliste Internationale (UCI) Europe Tour, gets underway today and continues until Sunday.

The five-stage race starts from the town of Csakvar and it will see riders take on 905km and over 6,400 vertical metres before finishing in Gyongyos-Kekesteto. This year’s Tour de Hongrie will be the second time Madan will be contesting the race.

He made his much-anticipated international debut with Bahrain Victorious at last year’s event, when he made history as the first-ever Bahraini rider to compete in a top-level UCI meeting.

Last season, the race was a happy hunting ground for the team, as Phil Bauhaus claimed two stage wins and secured the sprint jersey. This year, the team will be looking to go for the general classification victory with young Italian rider Edoardo Zambanini.

The rest of the team includes Chun-Kai Feng, Kamil Gradek, Filip Maciejuk and Johan Price-Pejtersen. This year’s queen stage is on the final day and is only the 11th edition the race ends with a summit finish.

The 188km stage has over 3,000 vertical metres and ends atop the Kekesteto, a first classified climb 12.1km long with an average gradient of 5.6 per cent, and will ultimately be the decider for the overall winner.

Bahrain Victorious sports director Michal Golas commented: “We have got one of the few races where all the riders from our team can find an opportunity. We will protect Edoardo Zambanini, who is our general classification leader.”