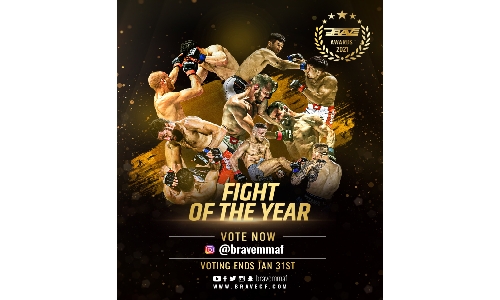 The global health crisis still made 2021 a year of change, but one thing stayed the same– intense action inside the cage under the BRAVE Combat Federation banner.

Those stellar performances made it tough to narrow down the list, but after plenty of deliberation, here are the five nominees for the Fight of the Year award.

The featherweight match-up between Youssef Ghrairi and Hassan Talal at BRAVE CF 48: Arabian Nights last March had everything you could want from a high-level clash between a pair of knockout artists.

It featured two athletes at the top of their games going back and forth until a shocking finish brought the curtain down as a knee shot from Ghrairi in the second round turned the lights out on Talal.

Meanwhile, Abdulmutalip Gairbekov and Roman Bogatov had everyone at the Falcon Club Arena in Minsk, Belarus on the edge of their seats when they locked horns on the undercard of BRAVE CF 51: The Future Is Here this past May.

In the end, it was Bogatov who stood tall and came out victorious by way of unanimous decision, improving his professional record to 12-1.

On the other hand, South Korean standout Tae “Ares” Kyun Kim defied odds when he entered enemy territory to face Nurzhan Akishev in the main event of August’s BRAVE CF 53, where he laid everything on the line to walk away with a unanimous decision win.

The epic encounter for the BRAVE CF Lightweight World Championship secured a spot on the list of nominees after it featured the amazing five-round grappling masterclass from lightweight champion Amin Ayoub defending his title against Egypt’s Ahmed Amir.

The challenger Amir put on a wrestling clinic against Ayoub, scoring takedowns in each round of the fight, but the champion was not willing to lose his title that easily.

Once the two fighters were able to experience the other’s skills on the ground, they opted for some striking exchanges that showed off their abilities on the feet as well.

Due to his efforts in neutralizing Ayoub’s wicked pBRAVE CF Nominates Five Epic Bouts For 2021 Fight Of The Yearower, Amir took home the gold and the distinction of Egypt’s first-ever mixed martial artist to win a major world title.

Lastly, the super welterweight tussle between Ismail Naurdiev and Olli Santalahti deserves a spot on the list as their match-up was a thrilling war of attrition.

Both men went blow-for-blow and gave each other a ton of trouble with their top-tier ground game, but it was Naurdiev who had his hand raised in triumph when the three scorecards were read.

Fans will play a big role in determining the winner of 2021’s Fight of the Year by visiting the official Instagram page of BRAVE CF and casting their votes.