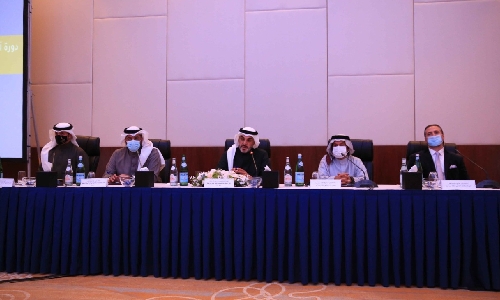 The supreme organizing committee of the 3rd West Asian Para Games announced the details of the upcoming event, at a press conference yesterday.

The event will be held from February 18 to 26 in the Kingdom of Bahrain.

He applauded the cooperation of all the government and private entities who have worked together to make this a success.

He said, “For Bahrain to be able to host such prominent games, such as the 3rd West Asian Para Games, it manages to fall in line with the objectives set by the Supreme Council for Youth and Sport and the General Sports Authority.

We are contributing to the overall tourism of the country, in particular, sports tourism as we support the aims of the tourism strategy for 2022 - 2026.

Hosting the games holds numerous benefits, one is strengthening the country’s position as an ideal destination for sports and sporting events, emphasizing the Kingdom’s readiness and eagerness to attract and organize games such as the Asian Para Games.

“We have also worked closely to contribute to the Sustainability Goals in which we have signed a memorandum with the United Nations Development Program, which include:

No. 3 Good health and well-being, No. 5 Gender equality, No. 10 Reducing inequalities, No. 16 Peace, justice and strong institutions to support that, No 17 Alignment with the goals.”

Shaikh Mohamed expressed his thanks and appreciation to His Majesty, King Hamad bin Isa Al Khalifa, and His Royal Highness, Prince Salman bin Hamad Al Khalifa, Crown Prince and Prime Minister, for his unlimited support for sports within our communities.

His Excellency also continued to praise and thank His Highness Shaikh Nasser bin Hamad Al Khalifa, Representative of His Majesty the King in Humanitarian Works and Youth Affairs, President of the Supreme Council for Youth and Sports, for his interest and encouragement throughout as the Kingdom was selected to host this important regional games.

Dr Abdulrazzaq Bani Rashid, President of the West Asia Para Federation also spoke at the press conference, expressing his confidence in the Kingdom of Bahrain’s ability to host games in such a distinguished manner, as they have been preparing and ensuring all of their facilities are fully equipped to suit all the Para athletes attending and competing, as well as the vast experience from their young cadres who have been a part of many games such as this.

The West Asia Para Federation indicated that they have been in close and constant contact with the Bahrain Paralympic Committee to learn more about the measures taken to organize these games, as well as what the Kingdom has in store to prepare the cadres supervising the games. They continued to praise and expressed their confidence in Bahrain’s ability to achieve successful games.

Ali Mohamed Almajed, Member of the Supreme Organizing Committee and Secretary-General of the Bahrain Paralympic Committee was also in attendance and stated that the games fall in line with the vision set by the Committee as well as the directives of His Highness Shaikh Nasser bin Hamad Al Khalifa, and reflects the interest and support of His Highness Shaikh Khalid bin Hamad Al Khalifa for all things related to sport.

“Such backing only further contributes to enhancing the Kingdom’s sports and athletic standing in their abilities to host large-scale games, which includes the 3rd West Asian Para Games, considered the second-largest event hosted in the history of the Kingdom for both Para athletes and abled athletes,” he said