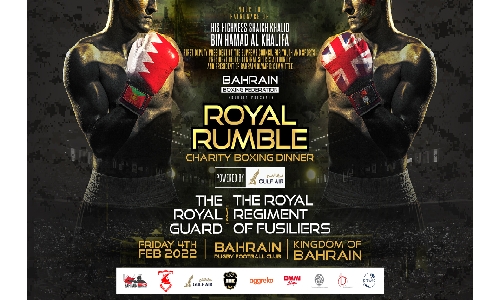 The group that will slug it out with the Bahrain Royal Guard at the highly-anticipated Charity Boxing Dinner dubbed “Royal Rumble” on February 4 has finally arrived in the Kingdom of Bahrain.

The United Kingdom’s Royal Regiment of Fusiliers, led by Captain John McCowliff and Sergeant Mark Carling, will figure in a series of boxing matches at the said gala event organized by KHK Boxing and sanctioned by the Bahrain Boxing Federation.

“This is a fantastic project and a once-in-a-lifetime opportunity that will offer so much experience to British soldiers.

It will be the first time some of the team have travelled outside of the UK to experience different cultures,” Carling said.

“The team is excited to meet new friends and training partners.

This event is not about winning but the development of both teams,” he added.

Meanwhile, McCowliff hopes that the event will be an avenue to forge solid bilateral relations between Bahrain and the United Kingdom.

“A win for our first boxing engagement would be fantastic, especially on foreign soil.

I hope to set out conditions and hope this can be an annual event.

I am looking forward to meeting the Bahrain training team to share ideas and listen to people who share a common interest and long-term goal,” McCowliff stated.

“Royal Rumble” is set to take place at the Bahrain Rugby Football Club in Janabiya, which will also be graced by well-renowned boxing personalities and former world champions such as Joe Calzaghe and Darren Barker.