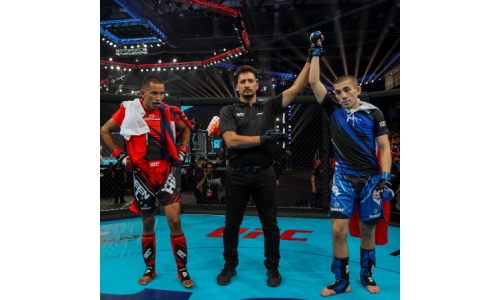 The Kingdom of Bahrain showcased why it is one of the big teams for the mixed martial arts amateur world championships as the former ranking leaders stormed to three wins in four match-ups during Day 1 of the IMMAF World Championships.

The competition, which is held in Abu Dhabi after three glorious years in Bahrain, features a 27-strong team of Bahrain’s finest young warriors in search of pride for their nation.

Under the vision of His Highness Shaikh Khaled bin Hamad Al Khalifa, Team Bahrain has been preparing for the Worlds at Al-Jasra and is now reaping the rewards of the hard work for the last two months.

In four fights held at Day 1, Team Bahrain earned three victories, led by Murad Guseinov, whose ninja choke stole the show as one of the best submissions of the day across the board.

Joining him in the victors’ column were Shamil Alikhanov and Kurban Idrisov.

Unfortunately, Ali Yaqoob lost his match-up due to an injury sustained on his shoulder but will return shortly to represent Bahrain most brightly once again.

Day 2 of the IMMAF World Championships promises more emotions for Bahrain, as an even bigger number of fighters are set to see action, as well as the three winners of Day 1’s bouts.