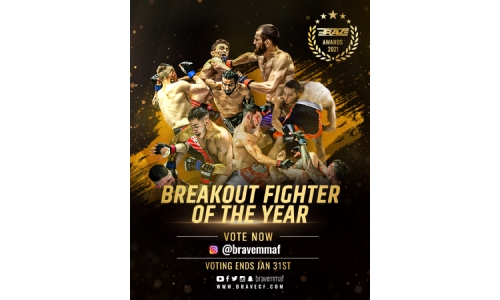 2021 has been a groundbreaking year for BRAVE Combat Federation, and several new faces have stepped up to the plate and put themselves at the forefront of the charge.

Many fighters have gone from relative obscurity to household names within a matter of months, and that is a testament to their skill, desire, and performances on the global stage.

With that being said, here are five standouts who could bring home the 2021 Breakout Fighter of the Year award.

Yanis “The Galactic’’ Ghemmouri came into the promotion as a hot prospect with a 9-1 record, but his maiden appearance proved that he’s more than that and showed what he’s made of by going to war with hometown hero Vladislav Novitskiy at BRAVE CF 51: The Future Is Here in Minsk, Belarus this past June.

Although Novitskiy had his whole country behind him on fight night, Ghemmouri rose to the occasion and eked out a split decision win to start his run in the organization on a triumphant note.

Joining Ghemmouri in the list of nominees for Breakout Fighter of the Year is Gamzat Magomedov, who went 2-0 last year and scored one of the biggest upset victories in 2021 by knocking out Mochamed Machaev in 54 seconds at BRAVE CF 52: Bad Blood in August.

A few weeks later, Asu Almabaev took the Bahrain-based outfit by storm in his promotional debut, compelling Aleksander Doskalchuk to wave the white flag courtesy of a rear-naked choke in the second round of their flyweight clash at BRAVE CF 53.

New contenders emerged through the pandemic-raged year with the likes of Ahmed “The Shadow” Labban establishing himself in the super lightweight division, defeating Nemanja Kovac (twice) and Virgiliu Frasineac astoundingly last year.

Rounding up the category is Axel Sola, who carried over his impressive amateur mixed martial arts success to the pro ranks by winning two fights in a row under the BRAVE CF banner in 2021.

Fans will have the power to herald 2021’s Breakout Fighter of the Year by casting their votes on the official BRAVE CF Instagram page.