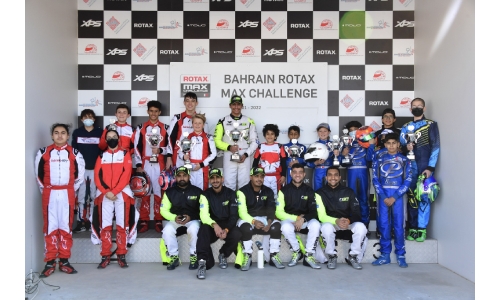 The Bahrain Rotax MAX Challenge (BRMC) kicked off its 2022 season over the weekend at Bahrain International Karting Circuit (BIKC) in Sakhir, and there was plenty of hotly contested racing right from the get-go in the Kingdom’s premier national karting championship.

Taking the honours in the first round were Najashi Rashdan in the Senior MAX category, Luca Kane Houghton in the Junior MAX, Khaled Alnajjar in the Mini MAX and Yousif Alghaith in the Micro MAX class.

All the action was held along BIKC’s 1.414-kilometre CIK-FIA track, with the Kingdom’s top karters of various ages and nationalities competing in Rotax-powered karts.

In the Senior MAX division, Najashi Rashdan secured first place following a thrilling Final that saw him take the lead only on the penultimate lap.

Rashdan started the race in fourth from 10 participants on the grid, with chief rival Fahad Almuqla on the pole. Almuqla held on to his position at the front for much of the 15-lap sprint, but on lap 14, Rashdan was able to gain two places—from third to first— and eventually kept up the pace until the chequered flag, which he took in a winning time of 13 minutes 38.355 seconds.

Almuqla had to settle for second, finishing 1.193 seconds behind, while Lewis Smith completed the podium-placers in third 2.089s back.

Meanwhile, Luca Kane Houghton won the Junior MAX category by the narrowest of margins in the group’s Final. Luca Kane started from third on the grid and was able to charge to the front on lap two, taking over for pole-sitter Tye Mejia.

Luca Kane then had to buckle down the rest of the way as fellow-competitor Mohammad Wally gave him a furious fight to the finish.

At the chequered flag, only 0.434s separated the pair, with Luca Kane winning in 13:53.357 after 15 laps. Gracie Rose Grantham also put in a strong challenge, ending the race behind Wally in third just 1.047s from Luca Kane.

In the Mini MAX class, Khaled Alnajjar claimed an outright victory from the pole, securing the chequered flag in 8:57.954 after nine laps.

In the Micro MAX category, Yousif Alghaith took first place in 10:03.365 after nine laps of racing. Following all the races, the winners have presented their respective trophies in podium ceremonies attended by officials from Bahrain International Circuit, BIKC and the Bahrain Motor Federation.

The BRMC is set to feature seven rounds in its 2022 season.

Rounds two and three are set to be held on February 4 and 5, while the fourth round is set to take place on February 26. Rounds five and six will then be held on March 11 and 12, setting the stage for the season-finale on March 25.