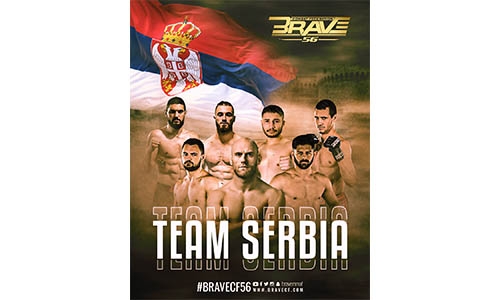 BRAVE CF 56 will wrap up the truly global MMA promotion’s 2021 calendar with a bang.

On December 18, Belgrade will host a show packed with the biggest international stars, as well as a who’s who of Serbian MMA, with 5 of the most prominent names in the country is highlighted.

Starting with Slobodan Maksimovic, who will be headlining the card.

Holding a professional record of 17 wins, 6 losses, and one draw, “Limp, as he’s also known as, is coming off two consecutive wins and plans to extend the streak to three against Rolando Dy, adding the biggest victory of his entire career to his record in the process.

The co-main event of the evening also features a Serbia vs the world match, with Miro Jurković taking on the former Middleweight title challenger Chad Hanekom.

With a professional record of 11 wins and 4 losses, Jurkovic is making his second BRAVE CF appearance and looking for his first promotional win.

Also looking for his first BRAVE CF victory in his second promotional appearance, submission specialist Borislav Nikolic is eager to get this important triumph in his turf.

Boasting a professional record of 8 wins and a single loss, Nikolic faces Matiss Zaharovs in a featured bantamweight bout.

In his promotional debut, the “Sledgehammer” was defeated by Ahmed Labban in a nail-biting contest back in March.

He’ll now have the chance to pay back, counting with the support of the home crowd.

Lastly, but not least, one of the rising stars in Serbian MMA finally makes his international debut.

Undefeated prospect Milos Cvetkovic puts his 4-0 record on the line against Nikolay Nikolov is a featured Welterweight bout.

BRAVE CF 56 will be promoted in association with Liga MMA and take place on December 18, at the Bel Expo Centar, in Belgrade Serbia.