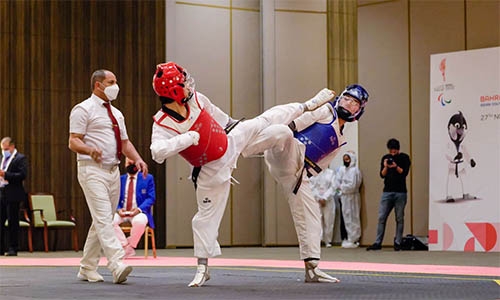 The gold medal was consolation for Palesha Goverdhan who had narrowly missed out on a medal at the Tokyo 2020 Paralympics in the 57kg category.

Iran won seven of the 22 medals on offer, including three golds, with Uzbekistan’s fighters the next most successful winning two golds.

Overall all eight countries who entered picked up a medal which bodes well for Asia in the thrilling sport. Tholradeth Ya, Cambodia’s only athlete at the games, won his country’s first-ever medal at a Youth Para Games when he took silver in the 1500m M U20 T46 event.

In Powerlifting, Saudi Arabia’s Adnan NoorSaeed clinched the first gold medal of the competition after lifting 117kg in the men’s junior -49kg event.

Uzbekistan won three gold medals overall on day one of the competitions with Indonesia and Thailand getting two each.

Korea and Iran picked up one gold apiece and UAE’s birthday girl Ayesha Almutaiwei got a silver medal on her special day in the youth -79kg.

In Goalball the final pool matches and semi-finals were played.

In the men’s competition, Iran continued their impressive form, sweeping Iraq 13-3 in the semi-final.

Having not lost a game throughout the tournament, they headed into the final against Thailand as favourites.

Thailand beat Korea twice in one day, once in the earlier pool match 14-4, then in the semi-final 12-5. In the women’s competition, Iran narrowly beat Korea 8-7 to advance to the final where they will meet Thailand.

The Wheelchair Basketball competition final will see Iran, who are unbeaten throughout the tournament, face off against Iraq.

Iraq will be hoping for a better result than when they met earlier in the competition though as Iran won 102-27, Iraq’s only defeat of the event.

Thailand and Saudi Arabia will battle it out for bronze.

With medals in the pool and at the track and field, Iran extended their lead on the medal table.

A total of 22 out of the 30 countries at the Games have now won a medal.