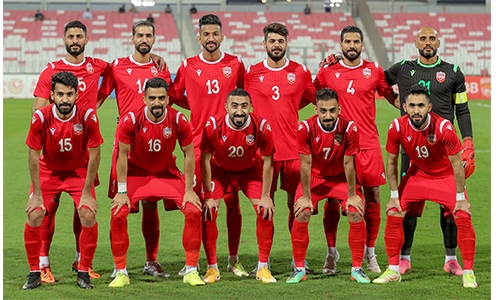 Bahrain’s final squad of 23 players that will be competing in the FIFA Arab Cup starting at the end of the month was announced yesterday by the Bahrain Football Association (BFA).

The call-ups of senior men’s national team head coach Helio Sousa are scheduled to gather today to begin their final lead-up to the tournament.

The Bahrainis are then scheduled to fly to Doha on Friday just a few days ahead of the start of the competition on November 30.

One of the bigger names not included in the squad is forward Abdulla Yusuf.

According to sources, a conflict in schedule with his club FC Slovan Liberec in the Czech Republic is the reason for his exclusion.

The Bahrainis played two friendly matches earlier this month in preparation for the tournament ahead.

They first lost to Morocco in a unique tune-up that was held over four 30-minute quarters, and then defeated Kyrgyzstan in their other exhibition game.

Bahrain is in Group A for the Arab Cup, which is set to feature 16 participating nations in all.

The other teams in the Bahrainis’ group are hosts Qatar, Iraq and Oman.

The nationals begin their campaign against the home team on opening night, before taking on Iraq on December 3 and then facing Oman on December 6.

There are four groups in all for the preliminary stage.

The top two squads at the end of a single round-robin advance to the knockouts.

The Arab Cup will help Bahrain prepare for their campaign in the third round of qualifying for the AFC Asian Cup 2023, which is set for June next year.

The tournament is being delivered by FIFA as a prelude to the FIFA World Cup 2022.

It is seen as a vital opportunity to test operations and facilities ahead of next year’s global showcase.

The FIFA Arab Cup is taking place in the same time slot as the World Cup, with the finals of both competitions to be held exactly one year apart.