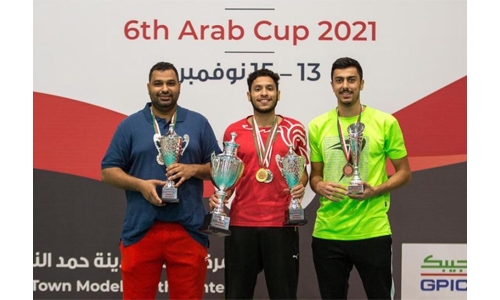 Bahrain came away with two medals—a gold and a silver—at the recently concluded sixth Arab Badminton Cup 2021, which was hosted in the Kingdom.

National team players Adnan Ebrahim and Jaffar Ebrahim were the two medallists. Adnan won the gold in the Men’s Singles category, and then teamed up with Jaffar to clinch the silver in the Men’s Doubles.

Adnan had defeated Bahaedeen Alshannik of Jordan in his singles final but then lost with Jaffar to the pairing of Mammeri Kocella and Youcef Sabri Medel in the doubles title decider. Following the completion of the play, they have presented their respective awards in a ceremony.