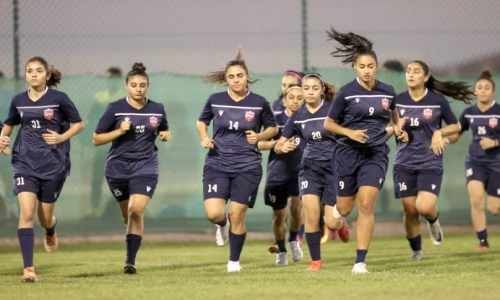 Bahrain’s women’s national football team are in their final stages of preparations for their upcoming qualifiers for the 2022 AFC Women’s Asian Cup.

The Kingdom is set to host the qualifying matches of Group A, which features Chinese-Taipei, Laos and the host Bahrainis. Turkmenistan were also set to compete in this group, but have withdrawn.

Bahrain therefore have just two matches to play in the coming week-and-a-half, first against Laos on Thursday and then against Chinese-Taipei on October 24. There are a total of 24 teams vying for a place in the AFC Women’s Asian Cup.

They have been divided into eight groups for qualifying. All eight group winners at the end of a single round-robin will book a ticket to the finals, which will be held next year in India.

The qualification groups are or have been held in five different locations, including Bahrain (Group A), Tajikistan (Groups B and C), Kyrgyzstan (Group D), Uzbekistan (Groups E, F and G) and Palestine (Group H). The Bahrainis played an international friendly match last week against India at home, but lost 0-5.