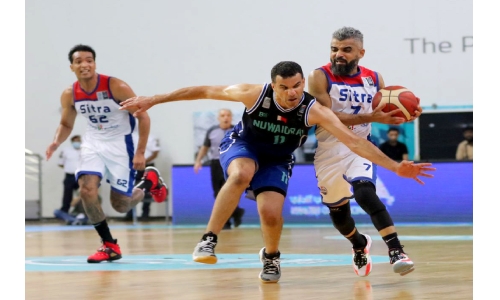 Sitra used a decisive endgame rally to help come away with their first win of the 2021/2022 Zain Bahrain Basketball League last night after defeating Nuwaidrat 78-67 at Zain Basketball Arena in Um Al Hassam.

Newly signed professional Marcel Jones scored a teamhigh 32 points and grabbed 14 rebounds to help spearhead the victors. They held a narrow 59-56 lead heading into the final quarter and stayed ahead 66- 65 with just over three minutes to play.

But a 12-2 game-ending run sparked by a Jones basket helped them pull away from their rivals in the closing moments. Ali Eid added 16 points for Sitra while Nawaf Nabeel had 10. Both Jones and Eid fired in four three-pointers apiece in the contest.

Anthony Walker was the top man in the loss for Nuwaidrat, who dropped to a 1-3 win-loss record. Walker had 33 points and 24 rebounds but had little help from elsewhere as he was their only player in double figures. In yesterday’s other game, Al Hala edged past Isa Town 115-107.

Amir Williams had 29 points to lead Hala while Ahmed Khalifa added 28. Talal Qaheri paced Isa Town with 27 markers. Hala had a big lead of up to 34 points, but Isa Town fought back in the final canto and got as close as three points, but could not complete the comeback. Hala improved to a 3-2 mark while Isa Town were handed their fourth successive defeat to go with zero wins so far.