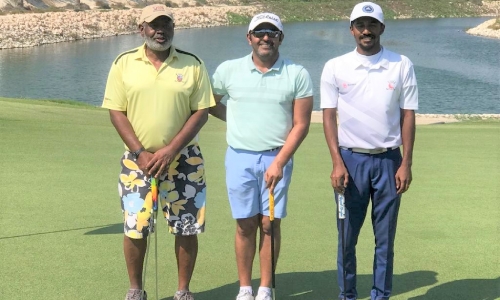 Bahraini golfer Khalifa Al Merisi emerged as the overnight leader after the first of three rounds yesterday in the third Bahrain Amateur Open golf championship, being played at The Royal Golf Club (RGC). Al Merisi carded a three-under-par 69 over the first 18 holes to take a three-shot lead over the rest of the field.

His day was highlighted by an eagle on the par five 14th of RGC’s Montgomerie championship course, which he unfortunately followed up with backto-back bogeys on the 15th and 16th holes.

He also registered three birdies on the front nine and banked on his strong start to take the top position on the leaderboard. Taking second place after round one with an even-par 72 score was Danish-French Viggo Sorensen, who had five birdies but also five bogeys. Mohammed Al Noaimi followed in third place four shots behind Al Merisi with a oneover-par 73.

In fourth, two shots over par with a 74 was Sultan Al Hakam, while Fahad Al Hakam was fifth with a three-over-par score of 75. Four players were tied-sixth on the scores, finishing four shots over par.

They were Abdulla Al Ya-qoob, Nasser Yaqoob, Khalifa Duaij and Abdulla Al Hakam. Nasser Saad Al Mahansi rounded out the top 10 with a five-over-par score of 77.

A total of 71 players teed off on the first day of play yesterday, with just one player unable to finish the round. The back-end of the scores saw three players tied in 68th place after going 39 over par for a total of 111 shots. Play continues at 7am today until around 2pm.

This year’s Open marks the first time it is being held as a World Amateur Golf Rankings (WAGR) event. Competitors will thus be able to improve their standing or become ranked players in the WAGR.

The first winner of the tournament title was Ali Al Kawari in 2019, and then last year Al Zayed clinched the crown following a three-hole play-off with Saudi Arabia’s Saud Al Sharif and England’s Matt Vigurs.

The tournament, organised by the Bahrain Golf Association, is being sponsored by Infonas, Kanoo Travel, Banz, Riffa Views and Reza Hygiene.

Indonesia's Bali reopens to international tourists, but with no flights