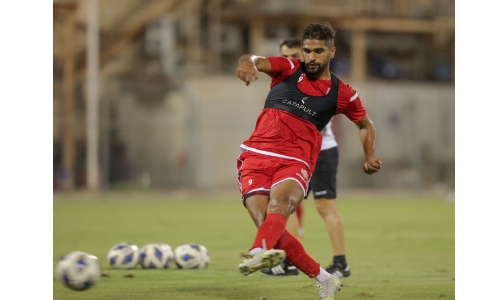 Head coach Helio Sousa is eyeing the start of the qualifiers for the AFC Asian Cup 2023 as Bahrain’s main focus in the coming months.

The Portuguese tactician said this as the senior men’s national team plays two friendly matches within the span of a week at home. The Bahrainis first took on Caribbean side Curacao last Wednesday in a game they won emphatically 4-0.

They are now preparing to face top Oceania side New Zealand on Tuesday at the National Stadium in Riffa. Aside from also preparing for their participation in the FIFA Arab Cup 2021 this November and December, Sousa is particularly gearing up the nationals for their continental qualifiers, which are expected to kick off in January/February of next year.

“With these friendly games, our main objective is the qualification and to be with the last teams for the AFC Asian Cup,” Sousa said. “As always, every game, we play to win and to be stronger tomorrow. This challenge that we have against Curacao and New Zealand are the strongest opponents we could at this moment.

“We need to keep improving, put more players working with us and know them better. It’s a process we are already doing for two years, and we need to keep getting stronger and keep winning the most as we can.”

Bahrain will be one of 24 teams from across Asia that will be competing in the AFC Asian Cup 2023 qualifiers, which will be in its third round.

The nationals have yet to learn of their qualification group. The draw is scheduled to be held in the coming weeks. The teams will be divided into six groups of four to play homeand-away matches.

The group winners and the best five runners-up across all groups will qualify for the Asian Cup, where they are joined by tournament hosts China and by the 12 teams which have already qualified directly from the second round.

Sousa had called up 26 players for their friendlies with Curacao and New Zealand. The team includes a number of Bahrain’s top international regulars, such as Komail Alaswad, Jassim Al Shaikh and Mohammed Jassim Marhoon from Riffa; Sayed Dhiya Saeed and Mahdi Humaidan from Al Khaldiya; Abdulwahab Al Malood from Muharraq; Mohammed Al Rumaihi from East Riffa; Abdulla Hazza and Ali Haram from Al Tadhamon SC in Kuwait; and Ali Madan from Al Urooba in the UAE. Sousa also called up the returning strike pair of Abdulla Yusuf from Czech Republic side Slovan Liberec and Mahdi Abduljabbar of Manama, who had a brace against Curacao.

New Zealand are the topranked team from the Oceania Football Confederation (OFC), currently 121st in the world. Head coach Danny Hay named a team of 21 players, who include 10 who were part of the Olympic side that reached the quarter-finals at Tokyo 2020.