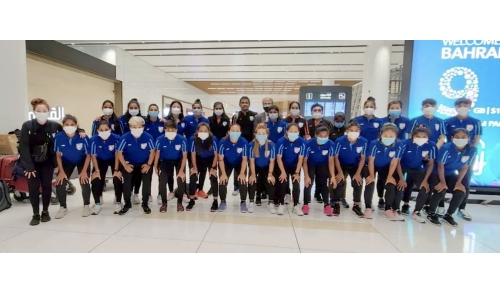 India’s women’s national football team have arrived in Bahrain and will tonight play an international friendly match against their counterparts from the Kingdom.

The fixture is scheduled for a 6pm kick-off and it will be played at the Hamad Town Stadium. The Bahrainis are preparing for the qualifying competition for the 2022 AFC Women’s Asian Cup.

The nationals are in Group A of the qualifiers along with Chinese Taipei, Laos and Turkmenistan, and the Kingdom will host the matches from October 18 to 24.

The Indians already have a spot in the Asian Cup as hosts. The tournament is currently scheduled for January 20 to February 6 in three host cities, including Mumbai, Navi Mumbai and Pune.

India travelled to Bahrain from the UAE, where they already played two friendlies against the Emiratis and Tunisia. Captain Ashalata Devi commented: “These friendlies have been very helpful to us. We have won one game, and lost another, but the learnings taken from them are immense.

The fact that we are getting to play against tough international sides, will give us a good reading of where we stand at the moment. “We have Bahrain up next, and our aim, like always is to win the match. The girls are all motivated and ready to give 100 per cent against Bahrain.”