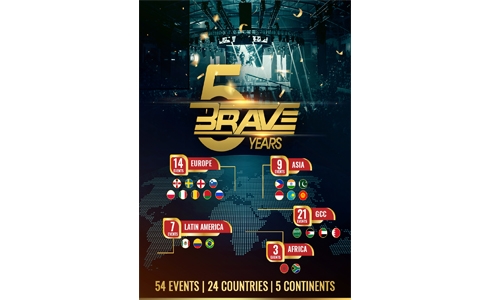 “On this day marking 5 years of BRAVE CF, I would like to thank His Highness Shaikh Khalid bin Hamad Al Khalifa for his vision, leadership and support,” says BRAVE CF President Mohammed Shahid.

“It has been 5 years of advocating change in the MMA industry, globalising the sport, empowering governance and providing opportunities. We look forward to another 5 years that will implement what was built in the first 5 years.

Thank you to the BRAVE nation for their love and support.

Together let’s continue the takeover and introduce a new age of MMA.” In five years of operations, the fastest-growing MMA organization in the world has broken several records, travelling to 24 different countries and making its debut in Poland on September 25th, with 54 extravagant events helping to revolutionize the sport around the globe.

In this period, BRAVE Combat Federation became the only international promotion to do events in South Asia, West Asia, Central Asia, and South East Asia with the largest active market share in Asia with operations developing across the continent.

BRAVE CF also made history in Africa, being the only international organization to host events on the continent.

In these five years, BRAVE CF has also developed the finest scouting program in the world of MMA, granting opportunities to fighters from across the globe, and providing talent from around the world with the global opportunity they crave and deserve.