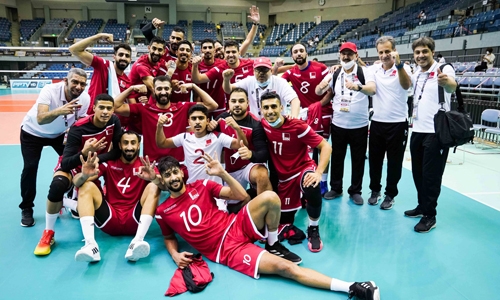 Bahrain opened their campaign in Pool A of the 21st Asian Senior Men’s Volleyball Championship in Chiba, Japan yesterday with a resounding 3-0 (27-25, 25-21, 25-21) victory over India at Chiba Port Arena.

The nationals, coached by Brazilian Marco Antonio Queiroga, had superior playmaking that helped spell the difference in the contest, in which Mohammed Yaqoob finished with a matchhigh 15 points, and with Mohammed Anan and Mahmood Abdulwahed contributing 13 points apiece.

The first set was tightly contested, but by its end, Ali Alsairafi helped earn the early match advantage after unleashing a service winner to make it 27-25 yo seal the opener. In the second, Bahrain were superior from the service line.

Setter and captain Mahmood Hassan ran his plays well and utilised the team’s advantage at the wings. They seized a 19-18 lead late on, and India’s errors in attack eventually proved costly as Bahrain were able to claim a two-set lead.

They then rode their momentum into the third set and a Yaqoob point capped the match win and gave the Bahrainis the strong start to the tournament. The Bahrainis will hope to continue their winning ways today when they take on hosts Japan, who are also Asia’s bronze-medallists from the competition’s previous edition.

The game is scheduled for 12noon start, Bahrain time. Bahrain then wrap up their Pool A campaign against Qatar tomorrow. The Japanese defeated their Qatari rivals 3-0 (25-20, 25-23, 25-21) in yesterday’s other Pool A contest.

Defending champions Iran, Pakistan, Thailand and Hong Kong are in Pool B, while Pool C consists of reigning silver-medallists Australia, China, Sri Lanka and Kuwait. South Korea, Chinese Taipei, Kazakhstan and Saudi Arabia make up Pool D. The top two teams from each group make it to the round of eight.

The semi-finals are scheduled for September 18, while the bronze and gold medal games are set for September 19. This year’s championship is Bahrain’s 10th participation in the continent’s leading event. Bahrain first competed in 1979 as hosts, and last appeared in 2015 when they finished 12th. They did not compete in the last two editions in 2017 and 2019. Bahrain’s best classification was eighth, which they achieved in the 1987 edition.

Filipinos in Bahrain urged to exercise right to vote