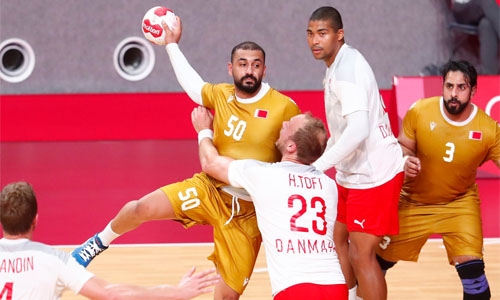 Bahrain faces a must-win situation today when they take on hosts Japan in their penultimate Group B game of the men’s handball preliminary round at the Tokyo Olympics. The Bahrainis have yet to score a point on the group standings following their three losses previously to Sweden, Portugal and Denmark.

They must now win their final two contests— first against the Japanese and then against Egypt on Sunday— to have any chance of advancing to the knockout quarter-finals.

Japan also have yet to win at these Games and will be out in full force against their Asian counterparts. The Japanese’s first three losses came against Denmark, Sweden and Egypt. Bahrain is currently ahead of the home side on the group table with a superior goal difference.

Today’s contest is scheduled for a 5 am throw-off, Bahrain time. The Bahrainis will be wearing the red kits while Japan will sport white shirts and black shorts. Meanwhile, the Bahrain delegation announced yesterday that handball star Kumail Mahfoodh has sustained an injury during training that will prevent him from suiting up for the national team.

According to the medical reports, Mahfoodh has suffered a muscle tear in his hand, which had prevented him from taking part in any of Bahrain’s games so far.