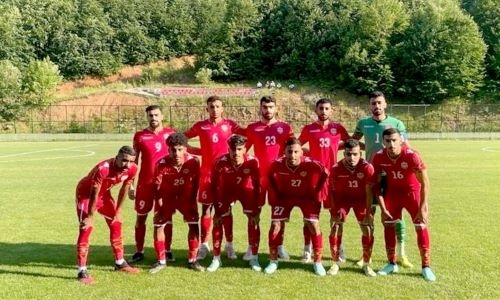 Bahrain’s under-23 Olympic football team romped to a 5-1 victory over Turkish club Beykoz in an international friendly match held in Istanbul.

The game was the first of their three tune-ups at the Turkish capital during the Bahrainis’ two-week training camp there. Each goal was scored by a different Bahrain player.

The Bahrainis are scheduled to return to the pitch on Thursday for their second friendly encounter at their camp.

The game will be played against their counterparts from Kuwait.

Originally, the nationals were set to face off with Bosnia-Herzegovina side NK Stupcanica Olovo on Monday next week in their final warm-up, but the Bahrain Football Association announced a change yesterday and will instead face Kuwait for a second time on the same scheduled date. Bahrain’s under-23s will be at their camp until Tuesday next week.

Coached by Ismail Karami, they are currently training with 28 players in Istanbul.

They are preparing for their upcoming competitions, including the AFC U23 Asian Cup Qualifiers, which takes place in October.

The Bahrainis are in Group C of the qualification competition, alongside Iraq, Afghanistan and the Maldives. Their qualifying games will be held in the Kingdom from October 27 to 31.