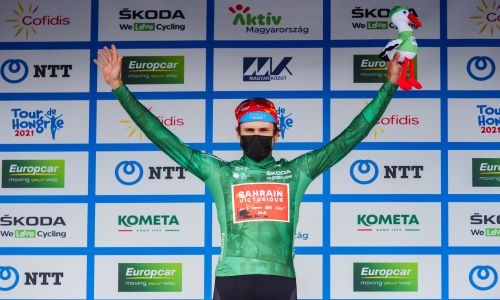 Team Bahrain Victorious added another feather to their cap yesterday after securing Green Jersey with Phil Bauhaus on their first appearance at the Tour de Hongrie.

The five-stage race, held over 792 kilometres and 7,954 verticle metres in Hungary, was also raced by Ahmed Madan, who became the first-ever Bahraini in the pro peloton.

Bauhaus secured the jersey with wins on the opening stage and stage three, while teammate Santiago Buitrago had a top 10 finish in the general classification.

Following his victory, Bauhaus was quoted as saying: “In general, I think it was a successful race for us finishing in the top 10 in GC, and I have two stage wins and the green jersey. “Today with two wins, we wanted the third one.

It was not easy today, and we are a bit disappointed as we went out a bit too early, and there was a slight headwind.

Overall, it was a good race.” Madan commented on his historic experience: “Amazing first race with the team at Tour of Hungary over five stages.

“At the start, I felt a little bit nervous as I didn’t know what to expect. Day by day, with the help of the team, I felt better.