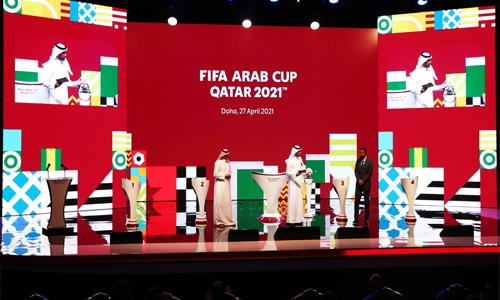 Bahrain is set to face off with Kuwait for a spot in the group stage of the first-ever FIFA Arab Cup. The highly anticipated football tournament is scheduled to take place later this year between December 1 and 18 in Doha as a prelude to the FIFA World Cup 2022.

The group stage will feature 16 teams in all, seven of which will come through the qualifying round while the others making it is based on their FIFA World Ranking for April of this year.

The draw for the group stage was held last night in Doha. It was attended by FIFA President Gianni Infantino. Should Bahrain win their qualifier against Kuwait, they will be in Group A alongside the Qataris, Iraqis, and the winner of the match between Oman and Somalia.

Group B will feature Tunisia, the UAE, Syria and Mauritania or Yemen. Group C will comprise Morocco, Saudi, Jordan or South Sudan, and Palestine or Comoros.

Group D will include Algeria, Egypt, Lebanon or Djibouti and Libya or Sudan. The four group winners and four group runners-up will proceed to the knockout stage.

The exact dates of the group matches and ensuing knockouts are to be determined. The tournament is being delivered by FIFA. It is seen as a vital opportunity to test operations and facilities ahead of the FIFA World Cup next year.

Infantino said of the tournament: “We are looking forward to seeing the region’s best teams battle it out to see which nation will become champion.

“Through football, this tournament will unite over 450 million people from across the region, and we are confident that the FIFA Arab Cup will help to build excitement across the region as we edge ever nearer to hosting the first FIFA World Cup in the Middle East and Arab world in 2022.”