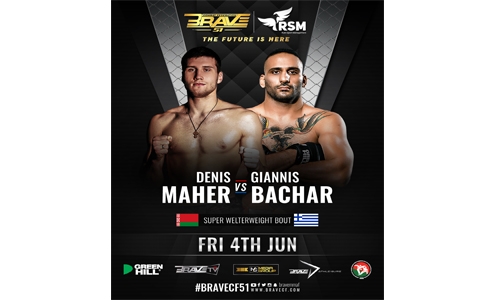 BRAVE CF 51, the event marking the debut of the truly global promotion in Belarus, has its co-main event of the evening. Greece’s Giannis Bachar will welcome BRAVE Combat Federation’s newcomer and Belarus hero Denis Maher in a three-round, Super Welterweight bout.

One of the most prominent rising stars in the European MMA scene, Giannis Bachar got the world’s attention after defeating Tahar “Fast Hands” Hadbi in the BRAVE CF 39 main event of the evening. Holding a professional record of 6 wins and only two losses, Bachar is born in Greece but fights out of Stockholm, Sweden, where he trains at Allstars Training Center, alongside the likes of Alexander Gustafsson, Ilir Latifi, and Khamzat Chimaev. Denis Maher is considered one of the best-kept secrets of Belarus MMA. Well, that’s until now, at least.

After shining on the national level, and building a solid amateur track record, Maher caught the attention of BRAVE Combat Federation’s scouting team and joined the fastest-growing MMA promotion in the world. Holding a perfect professional record of 7 wins and no losses, Maher is the former Middleweight champion in Belarus and has several accolades in hand to hand combat, as well as other combat sports.

BRAVE CF 51: The Future is Here takes place on June 4th, in Minsk, Belarus, which will become the 22nd country to host a BRAVE Combat Federation show. The fight night will be headlined by a Lightweight clash between former world champion Lucas “Mineiro” Martins and German-Moroccan star Marcel Grabinski.