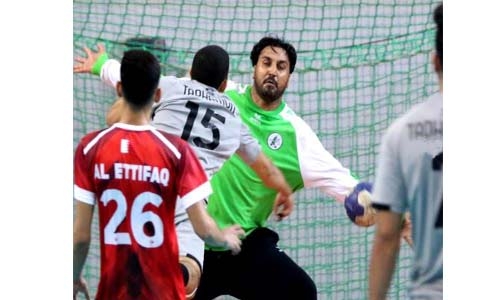 Defending champions Ahli used a strong second half to take control of their game against Al Najma for a 97-77 win, while Manama overcame a slow start and used a 12-0 run in the fourth quarter to pull away for a 98-83 victory over Hala.

Both series’ first games were played at the Zain Basketball Arena in Um Al Hassam.

In Ahli’s victory, Ahli outscored their opponents 30-18 in the third quarter to turn a 42-37 half-time advantage to a commanding 72-55 lead after three quarters.

They led by as many as 22 points in the final canto en route to the final buzzer.

American professional Mike Harris added 20 to go with a monster 26 rebounds and seven assists, while Ahmed Aldurazi finished with 19 points, 15 of which came from beyond the three-point line where he was a perfect five-for-five.

Hesham Sarhan contributed 13 in the win.

Ali Jaber led Najma with 23 points while Ali Jaffar had 19, including five three-pointers.

Ahli will now be looking to close out their semis match-up and book their return tickets to the championship round with a win in game two on Tuesday next week.

Meanwhile, in Manama’s win, the victors took a 70-67 lead into the final quarter and Hala was quickly able to tie the proceedings on a Hasan Gerashi three-pointer.

But that set the stage for Manama’s game-changing 12-0 run, which was sparked by a Sadiq Shukrallah triple and capped by an Earl Clark lay-up to go ahead 82-70.

Manama continued to pile on the pressure and built their biggest lead of the game at 17 following another Shukrallah basket from beyond the arc, which virtually iced the win with just over a minute remaining.

Hala were the early aggressors in the contest and they took a narrow 26-21 lead at the end of the first quarter, but Manama fought back in the second and outscored the rivals 25-16 to go up 46-42 at the half.

Mohammed Ameer came off the bench to contribute 23 points and nine rebounds, while Hasan Nowrooz added 12 and both Ahmed Salman and Shukrallah each had 10.

Xavier Gibson paced Hala with 17 points while Gerashi finished with 14.

Sadeq Kadhem Majed and Alwathaq Ali each had 13, Abdulrahman Ghali scored 12 and Hussain Salman added 10. Game two of the Manama-Hala match-up will be played on Monday next week.