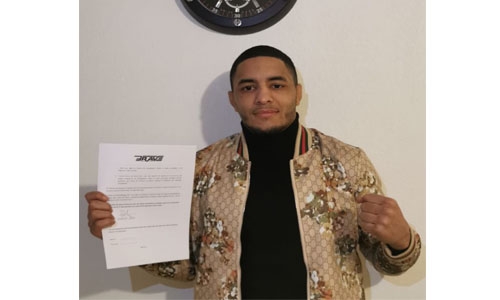 Ylies Djiroun is the latest European talent to join BRAVE Combat Federation, the fastest-growing MMA organization in the world.

The stacked weight-class has been beefed up even more with the addition of one of Europe’s finest talents.

Ylies Djiroun has signed a multi-fight deal with the fastest-growing MMA organization and is adding more man-power The 28-year-old native of France will now have the greatest challenges of his career ahead of him as he will soon lock-horns against some of the top Lightweights in the world.

Djiroun is the number one ranked Lightweight in Western Europe and will look to dominate the rest of the world under the BRAVE CF banner.

He holds a record of 17 wins and six losses with his latest win coming against Maxim Pugachev.

A grappling savvy fighter, he has nine submission victories to his name.

One of his wins is via KO/TKO and the remaining seven wins came as unanimous decision verdicts.

He has wins over notable fighters including Miroslav Štrbák, Guilherme Cadena, and Alexis Savvidis. BRAVE CF’s Lightweight division is currently reigned over by the division’s current champion Amin Ayoub.

Other high-level talents within the division include Ahmed Amir, Sam Patterson, Rolando Dy, and Abdisalam Uulu Kubanychbek, as well as the former kingpin Cleiton ‘’Predator’’ Silva.