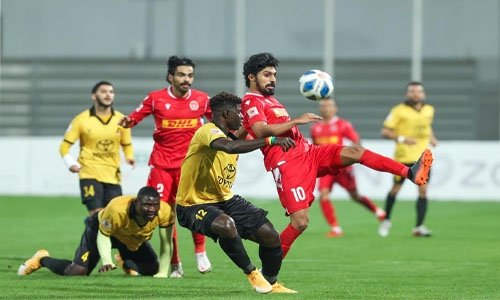 Isa Ahmed Khalib fired in the winning goal in the first half, and Muharraq were unable to equalise despite coming close multiple times.

Khalib set home a rocket in the 27th minute from several yards outside of the penalty area which went straight into the left of the goal and evading the outstretched arm of Muharraq goalkeeper Sayed Mohammed Jaffar.

That proved to be enough to separate the two sides at the final whistle, as Ahli claimed only their second win of the season.

They improved to eight points, level with Muharraq who suffered their fourth loss but have a superior goal difference.

Meanwhile, Hidd came away with their win thanks to a goal from Abdulla Duaij and an own goal by Budaiya’s Sadq Jaafar.

Nigerian professional Daniel Israel Nosike was able to supply the lone consolation for the losing side. Hidd came away with their third victory as they improved to 11 points, while Budaiya were handed their third loss and stayed on nine points.