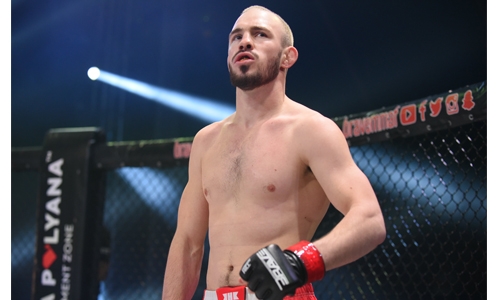 After his BRAVE CF debut win, Roman Bogatov is riding high in confidence.

He certainly proved his calibre with his win at BRAVE CF 46, surviving some tough spots against Nurzhan Akishev to eventually take over and get a unanimous decision nod in his favour.

Following the victory, he dished out a scathing warning to his future opponents, telling them that a first-round finish would be a less painful option for them compared to going the full course of a fight with him.

Roman Bogatov has molded himself into a complete MMA fighter, evolving from the pure wrestler he once was.

With submission threats and knockout power added to his arsenal, he is more than capable of ending a bout at any moment.

The Russian phenom has seven out of 11 professional wins coming by way of stoppage.

According to the 30-year-old Featherweight, his future opponents should hope to get finished in the first round because the longer the fight goes the uglier it will get for them.

“For my future opponents, I want to say that it is better that they get finished in the first round or I will beat them for the remainder of the fight,” he said.

Ultimately it is the vacant Featherweight world title that he is after, “I want to thank BRAVE CF. I like this organization, it is one of the best promotions. I want to tell Mohammed Shahid (BRAVE CF president) that I am going for the title.

I came to BRAVE CF for the title.” he said. Bogatov will face fierce competition in the featherweight division, as he joins the likes of Dumar Roa, Gabriel Fly, Anzor Abdulkhozhaev, and Mochamed Machaev, who are also in the hunt for the vacant Featherweight World Title.

He has also announced himself as a future title contender, making sure to call out his entire division for a title shot.