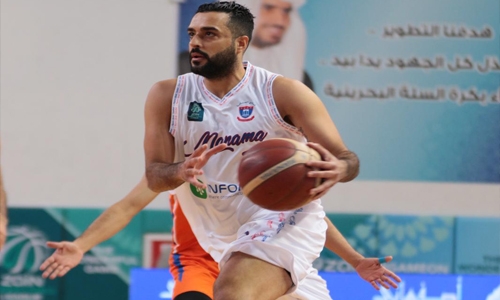 Mohammed Hussain and Hassan Nowrooz combined for 52 points, including 11 three-pointers, to lift Manama to a resounding 100-77 victory over Al Hala last night in the 2020/2021 Zain Bahrain Basketball League, being played at Zain arena in Um Al Hassam.

Manama pulled away from their rivals in the second half as they maintained their pristine record after seven games. Hussain finished with a team-high 28, which included six makes from beyond the arc.

He almost finished with a triple-double as he also registered nine rebounds and 10 assists. Nowrooz chipped in with 24 along with five triples. Ahmed Salman added 18 while Ahmed Najaf scored 16.

Sayed Kadhem Majed paced Hala in the loss with 31.

He was also on fire from the perimeter as he buried six three-pointers.

Hala were the early aggressors and they took a narrow 24-20 lead at the end of the first quarter, but once Manama got into their groove they were in control and they headed into the break with a narrow 48-44 advantage.

Manama then raised the tempo in the third period and went on a 16-3 run that turned a two-point lead into a 71-56 cushion.

They headed into the final canto up 76-64 and did enough over the game’s closing stages to seal the comfortable result.

Hala suffered their second consecutive defeat and dropped to a 5-3 win-loss record.