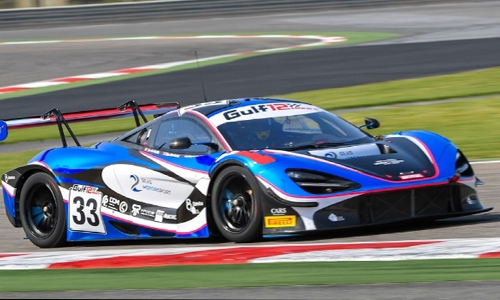 Barnicoat and teammates His Highness Shaikh Isa bin Abdulla Al Khalifa and Martin Kodric went into quakifying’s final part, trailing the team’s sister #7 McLaren on the average times. But Barnicoat’s stellar first quick lap, seven-tenths of a second quicker than that of Porsche Supercup runner-up Dylan Pereira, ensured that both the team’s cars would start from the front.

“What set us up for such a good qualifying was that HH Shaikh Isa did such a strong job in the first session,” Barnicoat was quoted as saying on the event’s official website. “From that moment, it filled all three drivers with confidence because it’s HH Shaikh Isa’s first race in GT3, and his first race with 2 Seas. He took it in his stride and was only one-tenth of a second behind Ed [Jones, in the sister #33 car]. “From that moment, Martin and I looked at each other and felt that we were in the mix for pole position. “The track evolved a lot throughout qualifying, and I still felt that there were one or two-tenths left on the table. We put quite an advantage on the rest of the field.”

Today’s Gulf 12 Hours Bahrain is scheduled to start at 9.30 am with part one, followed by part two from. 5.30pm. Earlier yesterday, 2 Seas’ two cars took turns topping the timesheet in the day’s practice sessions.

Their #33 McLaren 720S GT3 led the third and final Free Practice session, with McLaren factory driver Ben Barnicoat quickest. He set the fastest time 2:00.506. Barnicoat was eight-tenths of a second ahead of the #8 Kessel Racing Ferrari 488 GT3 Pro-Am entry driven by Nicola Cadei. The #27 Kessel Racing Ferrari 488 GT3 Am car of David Fumanelli was third. In the second practice, leading the field was the #7 McLaren 720S GT3 of Ed Jones, who took to the front ahead of the sister #33 McLaren of HH Shaikh Isa.

In a session that was mostly used to practice pit stops and driver changes, Jones, in his first taste of McLaren machinery, set the quickest time of 2:01.267, less than two-tenths of a second quicker than 2 Seas co-owner HH Shaikh Isa. The #3 RAM Racing Mercedes AMG GT3 of Callum Macleod led the opening Free Practice session of the weekend.

Should government employees be allowed to run a business in Bahrain?