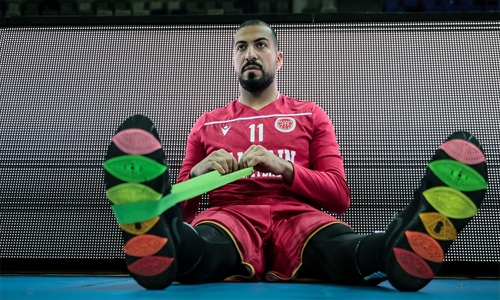 The men’s national basketball teams participating in the upcoming FIBA Asia Cup 2021 qualifiers in Bahrain are scheduled to begin arriving tomorrow, ahead of the start of play on Friday.

The Kingdom will be hosting two groups in this qualification window, including Group D in which the home side is placed alongside Iraq, Lebanon and India; and Group A which features the Philippines, Thailand, Indonesia and Korea.

The Koreans have withdrawn from taking part and FIBA Asia has taken their games off the schedule.

Set to reach Bahrain tomorrow are Iraq, Lebanon, the Philippines, Thailand and Indonesia, while India is scheduled to arrive on Tuesday.

Officials from the Bahrain Basketball Association (BBA) will be receiving the visiting delegations at Bahrain International Airport and will assist them on their arrival formalities. The teams will then be transported to their residence at Gulf Court Hotel.

The qualifiers will be taking place at the Khalifa Sports City Arena in Isa Town, while the national teams will be able to train at Zain Basketball Arena in Um Al Hassam and at Manama Club in Juffair. The games will be held with no spectators in attendance.

BBA secretary-general Ahmed Yousef confirmed that strict health protocols would be in place to ensure the safety of all participants to prevent infections from the coronavirus. Aside from the required tests the visiting delegations will need to undertake before their departure for Bahrain and upon reaching the country, rapid tests will also be conducted during the qualifying competition, in cooperation with the Bahrain Olympic Committee, the Ministry of Youth and Sports Affairs and the Ministry of Health.

Meanwhile, FIBA Asia following Korea’s decision not to travel to Bahrain has done a minor change in the schedule of games. The Philippines were previously scheduled to play Thailand on Thursday night, but it has been moved to Friday as part of a three-game schedule on the day.

Home side Bahrain will be playing two games in this qualifying window. They will first play Iraq on Friday and then take on India on Sunday. Both fixtures are scheduled for 7 pm tip-offs.

The Bahrainis have been preparing for the qualifiers behind closed doors under American head coach and former NBA champion Sam Vincent.

Bahrain have already taken to the hardwood twice earlier this year, including a 68-67 win at home against India, which they followed with a 73-116 loss to Lebanon in Beirut.

The nationals are hoping to finish, as one of the top two teams from qualifying’s Group D in order to book their tickets to the FIBA Asia Cup. If they finish third, they will have to play in another stage of qualification for a chance to claim one of four other spots up for grabs for the 2021 FIBA Asia Cup. If they finish last, the Bahrainis will be out of the running for a tournament berth.