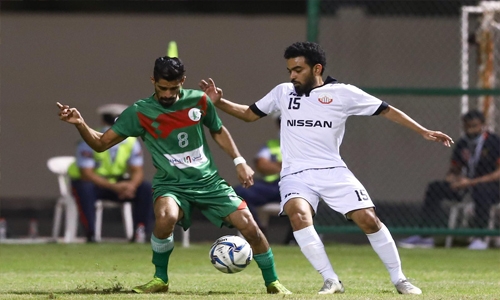 Isa Town was the big winner yesterday on a busy night of action that featured four matches in the 2020/2021 Bahrain Football Association (BFA) Cup, held at separate venues.

Isa Town hit four past Al Ittifaq in a resounding 4-0 victory. It was their first victory in Group B of the competition’s preliminary round after opening with a draw against reigning Cup champions Muharraq. Ittifaq, on the other hand, suffered their first loss after beating Al Hala in their first game.  Also yesterday, Malkiya nearly matched Isa Town but gave up a goal to Al Ahli in a 4-1win in Group C.

Malkiya were able to register their first victory of the tournament after narrowly losing their previous match to Sitra, while Ahli were making their first appearance in the competition and began their campaign with the loss.  Elsewhere in yesterday’s BFA Cup ties, Manama beat Hala in another Group B clash while Sitra took care of Al Tadhamon 3-1 in the other Group C encounter.

This year’s BFA Cup features four groups in the ongoing preliminary round, at the end of which the top team in each group moves on to the semi-finals.