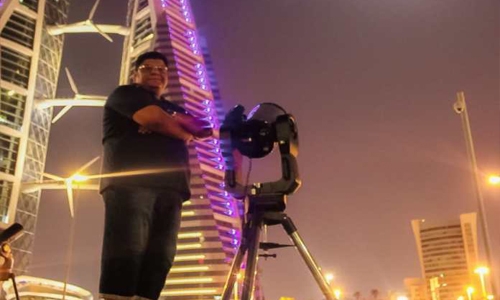 The year 2020 will come to a close soon, but only after performing some unique celestial events for us to enjoy, said astronomer Ali Al Hajri.

The Earth, Al Hajri said, will witness a false lunar eclipse as the Moon passes through a cone-shaped shadow cast by the Earth during Rabi ul Akhir, the fourth month of the Islamic Calendar.

This phenomenon, he said, however, is not visible from Bahrain, as the Moon will be positioned below the horizon here.

It will be visible in the American continent, the Arctic, Australia, central to Eastern Asia and far northwestern edges of Europe, except for Africa and the Southwestern part of Asia.

Al-Hajri has earlier said that Bahrain will not witness a total eclipse of the Moon before 7 September 2025 and that the closest phenomenon of a false lunar eclipse Bahrain will witness is on 8 November 2022 and 5 May 2023. The closest phenomenon of a partial eclipse of the Moon will be on 28 and 29 October 2023 and 18 September 2024.

The second phenomenon, Al Hajri said, is the approach of an asteroid dubbed SO2020.

With a diameter of about 6 m, the asteroid poses no threat of falling to the Earth.

The SUV sized asteroid takes 385.7 days to complete a revolution around the Sun.

The third phenomenon is the final total solar eclipse, which is visible from Chile and some parts of Argentina. Some regions in southern South America, south-west Africa, and Antarctica will see a partial solar eclipse if the weather permits.

During this phenomenon, the Moon, during Jumada al-Awwal, the fifth month of the Islamic calendar, meets the Sun above Bahrain's horizon at 8.25 pm.

The Great Conjunction of Jupiter and Saturn

The year 2020 will come to a close with the beautiful astronomical phenomenon, which is the great conjunction of Jupiter and Saturn on 21 December 2020.

At the peak, Jupiter and Saturn will be only 0.1degrees apart. That is just 1/5 of a full moon diameter.

One could watch this on the Bahrain horizon at sunset at exactly 4.50 pm, and the separation angle between the two planets is less than a degree!

Given the small angle of elongation between the two planets, whoever observes this phenomenon with the naked eye will only see Jupiter, so use binoculars and telescopes to monitor this distinctive phenomenon that only occurs almost every 20 years.