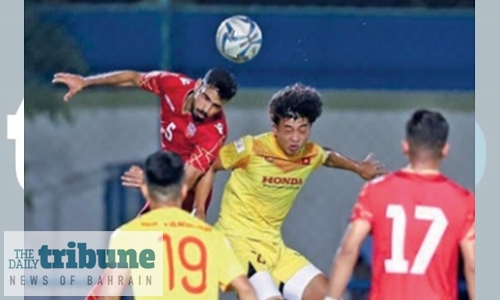 Bahrain’s under-23 Olympic football team scored a hard-earned 2-1 victory over their counterparts from Vietnam yesterday in a friendly match played in Bangkok. The tune-up was part of both teams’ preparations for the 2020 AFC U-23 Championship, which is scheduled to kick off on Wednesday in Thailand.

On target for Bahrain in the match were Ahmed Saleh and Abdulrahman Al Ahmadi. The friendly was the first for Bahrain as part of their final preparations for the upcoming competition.

Bahrain are making their debut in the prestigious Asian Football Confederation (AFC) event, which also acts as the Asian qualifiers for next year’s Tokyo Olympics. The top three teams will book a seat at the Games.

A total of 16 teams are taking part. Bahrain booked their tickets in the event after winning their qualification group. The Bahrainis play in Group A of the preliminary round, where they will be facing Australia, Iraq and hosts Thailand.