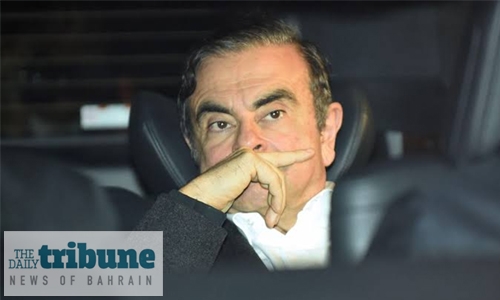 Fugitive former Nissan boss Carlos Ghosn was caught on security camera leaving his Tokyo home by himself on the day he fled to avoid a Japanese trial, local media reported Friday. Ghosn was not seen returning home after leaving around noon on December 29, public broadcaster NHK said, citing people involved in the investigation.

He is thought to have taken a private jet from Kansai Airport in western Japan on that day, heading for Istanbul. It is believed Ghosn headed from there to Beirut. The news comes a day after prosecutors raided the residence as part of an initial probe into his flight. NHK said police were analysing other surveillance footage, believing there is a possibility he joined someone to head for the airport.

The camera placed near the entrance of his Tokyo residence showed no suspicious person around the time that Ghosn left, according to NHK and the business daily Nikkei. Ghosn, who faced multiple charges of financial misconduct that he denies, won bail in April but with strict conditions -- including a ban on overseas travel and living under surveillance.

But the executive, who has French, Brazilian and Lebanese nationalities, managed to slip out of Japan on Sunday despite having handed over his three passports to his lawyers.

Ghosn said on Thursday through the Paris-based agency handling his public relations that he organised his dramatic escape from bail in Japan alone and that his family had nothing to do with his escape. The circumstances of Ghosn’s Hollywood-like flight from Japan are still unclear, amid colourful reports that he hid in a musical instrument case -- denied by his entourage.

On Thursday, Kyodo News quoted an associate of Ghosn, Imad Ajami, as claiming the tycoon was helped by two private security operatives who pretended to be part of a music band for a Christmas party. But speaking on Friday, Ajami said this scenario was “speculation.”

“I don’t know how he left” Japan, Ajami said in a phone interview, adding that he had had no direct contact with Ghosn since he left Japan.

Interpol, the international police cooperation body, has issued a “red notice” for Ghosn’s arrest in the wake of him fleeing Japan, while Turkey announced it was holding seven individuals in connection with his escape. The seven included four pilots as part of the probe focusing on two flights, a Bombardier labelled TC-TSR flying from Osaka to Istanbul and a private jet to Beiruit, according to news agency DHA.

Ghosn was able to enter Lebanon on a French passport, according to airport documents. A court in Tokyo had allowed Ghosn to keep a second French passport as he needed one to travel inside Japan, a source close to the matter said. According to this source, the Japanese court had allowed Ghosn to keep the passport so long as it was kept “in a locked case” with the key held by his lawyers.

Lebanon and Japan do not have an extradition agreement under which Ghosn could be sent back to Tokyo. A French minister meanwhile said France “will not extradite” Ghosn if he arrived in the country “because France never extradites its nationals.”

His home in France was searched in June as part of a probe into his sumptuous marriage celebrations at the Palace of Versailles in 2016, but has not yet been charged with any crime in the country

Tea producers turn over a new leaf as prices stumble