Nationals barge through to semis | THE DAILY TRIBUNE | KINGDOM OF BAHRAIN 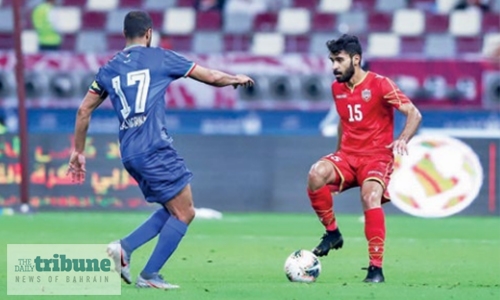 Bahrain defied the odds and squeezed into the semi-finals of the 24th Arabian Gulf Cup last night following a drama-filled 4-2 victory over Kuwait in their final Group B game of the tournament’s preliminary round. Naturalised striker Thiago Augusto came on as a second-half substitute and provided the magic that the Bahrainis needed to pull off the hardearned triumph.

Augusto scored twice within the span of just 10 minutes to help lift the nationals to the winning margin they required in order to make it through to the next stage. Augusto’s brace added to earlier goals from teammates Ali Madan and Jassim Al Shaikh, who were both also in spectacular form in the contest. Kuwait’s Youssef Nasser and Ahmed Zanki were both on target for their team as they put up a valiant fight in a hugely intense encounter.

Saudi Arabia took down defending champions Oman 3-1 in the other divisional fixture played simultaneously at a different venue. Following both results, the Saudis marched on to the final four as Group B winners with six points, while Bahrain advanced with a superior goal difference over Oman after both teams finished with four points on the table. Kuwait ended their campaign with three points in last place. The Bahrainis now face off with unbeaten Group A winners Iraq in the semi-finals, while Saudi take on hosts Qatar. Both games in the last four will be played on Thursday.

The concluding Group A games were also played yesterday, with Iraq and Yemen battling to a goalless stalemate and the Qataris beating the UAE 4-2. In Bahrain’s win over Kuwait, all but one of yesterday’s goals were scored in a pulsating second half that only confirmed the semi-finalists following Augusto’s second goal three minutes into second-half stoppage time. Madan fired in Bahrain’s opener with a brilliant solo effort in the opening minute of first-half added time. He dribbled the ball nearly a quarter-way up the pitch while being chased by the Kuwaiti defence and then hit a low shot past goalkeeper Hameed Youssef to give the Bahrainis the lead.

The second half then began with a huge blunder by Al Shaikh when he took down Kuwait’s Redha Abujabarah in the box for a penalty. Nasser stepped up to take the spot kick and he drove the ball home into the bottom-left corner with Bahrain’s Sayed Mohammed Jaffar, who had made a few crucial saves earlier in the match, diving the opposite way. There was then a controversial moment after Nasser scored another goal in the 65th minute to give the Kuwaitis the lead.

His effort was cancelled by the match referee, however, after VAR technology showed that Nasser had tugged on the shirt of Bahrain’s Sayed Redha Isa, which caused Isa to fall over and allow Nasser to go unmarked as he charged towards the box to receive a pass and score. With the 1-1 tie restored, Al Shaikh made up for his penalty gaffe with Bahrain’s second goal of the night. He had a fine strike from just outside the box in the 69th minute off a pass from Mahdi Humaidan to give Bahrain back the lead and revive their semis hopes.

Augusto was then inserted by Bahrain head coach Helio Sousa and he made his impact instantly. His opening goal in the 83rd minute came from a perfect cross by Al Shaikh, which virtually sealed Bahrain’s qualification. But there was still some drama to be had as Kuwait’s Zanki scored just two minutes later to reduce the deficit, until Augusto put any Bahrain nerves to rest with his second goal, sealing both the win and the coveted final four berth.