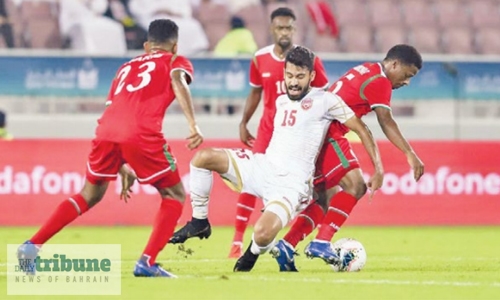 Bahrain and Oman played to a goalless draw last night as they opened their campaign in the 24th Arabian Gulf Cup at Abdullah bin Khalifa Stadium in Doha. The Bahrainis had multiple chances to score in the hotly contested affair, but they were unable to find the finishing touches in what was a winnable game against the tournament’s defending champions.

The stalemate gave both Bahrain and Oman a share of the points in Group B. In last night’s other divisional fixture, Kuwait defeated Saudi Arabia 3-1 to go top of the group table. Bahrain’s draw marked the national team’s third straight international match where they were unable to score. Prior to the Gulf Cup, they had two goalless draws away from home, first against Hong Kong and then facing Iraq.

In the 38th minute Al Rumaihi had Bahrain’s one and only chance on target in the first half, but his turning left-footed shot went straight to Omani goalkeeper Faiz Al Rushaidi. Oman also had a crack at goal on the stroke of half-time, but the attempt of Ali Al Busaidi was calmly collected by Alawi. Bahrain had majority of possession in the opening 45 minutes but had only Al Rumaihi’s chance to show for it. Late in the second half, Alaswad had likely Bahrain’s best chance of the night.

In the 73rd minute, he was right in front of goal but his shot from close range was stunningly parried by Al Rumaihi. The Omanis also had late chances in the final five minutes of regular time through Mohsin Al Khaldi, Saad Al Mukhaini and Al Mandhar Al Alawi, but Alawi proved to be up to the task each time. One of Bahrain’s final shots of the game was in the third minute of second-half stoppage time when Mohammed Marhoon’s low attempt was on target but punched away by Al Rushaidi.

Following the tie, Sousa said in his post-match Press conference that it was an excellent match for his team to gain experience and continue their development. He pointed out that his players had many chances to score, especially in the last 15 minutes, but they were unable to translate those opportunities into goals. Sousa also praised Oman and their players for the effort they put in.

On Bahrain’s next Group B fixtures, Sousa said that his team will once again be ready to go for wins and that he expects to bring some changes to his line-up.