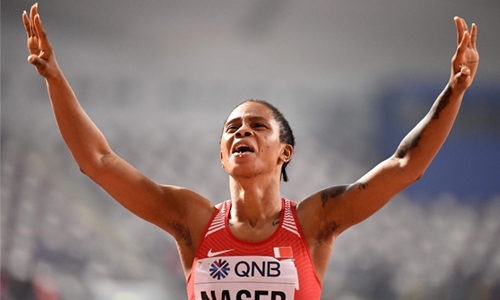 Bahrain’s Salwa Eid Naser stunned race favourite Shaunae Miller-Uibo to take the women’s 400 metres world title on Thursday in the third fastest time ever run of 48.14 seconds. The 21-year-old Nigeria-born sprinter -- silver medallist in the 2017 final -- was clear coming into the straight and though Miller-Uibo closed she had too much of a gap. Only East Germany’s world record holder Marita Koch and Jarmila Kratochvilova of the former Czechoslovakia have run faster and both were over 30 years ago.

“I’m the first one to win a global medal for Bahrain -— it is really rewarding and I’m so happy,” she said. “I still can’t believe the time. The time is so crazy, crossing the line and seeing the time I went completely crazy. “Yes I was training so hard but I never expected to run this fast.” Naser, the Asian Games champion, said Bahamas star Miller-Uibo had been the catalyst for her performance. “I think she (Shaunae) is an amazing athlete,” she said.

“I don’t think I would have done that alone of course. “She’d been there to push me and is very competitive. I love her energy and already said thank you to her because without her I don’t think I would have gone so fast. “So I’m happy this race happened.” Miller-Uibo took silver with a time of 48.37sec -- the sixth fastest of all time -- whilst Olympic bronze medallist Shericka Jackson of Jamaica was third (49.47). Miller-Uibo -- suffering her first defeat since finishing eighth in the 100m at the 2017 Diamond League meet in London -- sat on the track draped in the Bahamas flag, her hair dyed in the national colours, shaking her head.

“I let her get away too much on the kerb. I can’t compete with her with that sort of time,” admitted Miller-Uibo. “She was too far away.” The slight of build Naser produced an astonishing burst of speed coming round the bend passing defending champion Phyllis Francis and leaving Miller-Uibo with a lot of ground to make up. Naser did not falter even as Miller-Uibo ground down the gap between them but it was not even small enough for the 25-year-old to repeat her dive over the line that secured her the 2016 Olympic title.

Naser, who moved to Bahrain as a child, said the time had taken her breath away. “Yes I’m a world champion, but seeing the time I screamed so loud, I was so happy,” she said. “I have my friends here with me and my coach. Hearing them shout my name before the race started was so motivating. “I’m used to chasing. When you watch my race normally I chase. Today I wanted to be chased and it worked.” The rest of the field were onlookers but Jackson added another world bronze to the one she won in 2015.