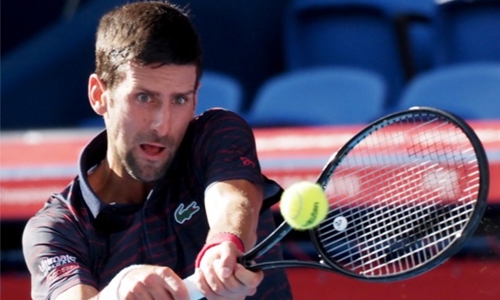 World number one Novak Djokovic yesterday put on a stunning show of supremacy at the Japan Open with a 6-1, 6-2 win over Lucas Pouille of France. The Serb more than overwhelmed his opponent in the quarterfinal match, showering Pouille with a barrage of powerful, precision shots to deep, wide corners mixed with delicate drop shots. “I am not a machine. But I did play like one today,” he said after their 50-minute contest.

“This was one of the best matches I played this year. Very, very pleased with the way I feel and played on the court,” said Djokovic, who will face either David Goffin of Belgium or Chung Hyeon of South Korea in the semifinals. “I am looking forward to another battle tomorrow, hopefully I will be able to keep up with this quality of tennis.” The latest victory provided further evidence of his swift recovery from a left shoulder injury that caused him to pull out of the US Open.

The Japan Open is the first competition for Djokovic since the incident. He nailed eight aces and never committed double fault while collecting points on 82 percent of his successful first serves. After cruising through the first set, Djokovic stepped up his tennis and began the second set by taking four games straight. Pouille fought back to keep the fifth game and in the sixth game, he collected his only break of the match.