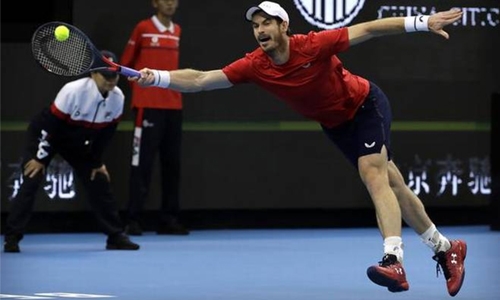 Andy Murray said that his comeback from career-saving hip surgery was progressing better than expected despite going down fighting in the China Open quarter-finals yesterday. The 32-year-old Briton lost 6-2, 7-6 (7/3) to top seed Dominic Thiem in Beijing, but said: “I think this (week) was maybe the best in terms of how I played since I came back. “It was great for me, I played three matches in four days, which is quite a lot.

“Actually I felt better than I expected today, as well,” said the former number one, who had a major operation in January and only returned to singles tennis in August. Asked by AFP if he was further ahead than he expected to be in his comeback, he replied: “Yeah, maybe. “I’m getting there, this week is better than last week, I hope next week is better than this week,” the three-time Grand Slam champion said. “That’s how I have to try to keep going to see where my limit is, I don’t think I’m at that limit now.

“I think I can keep improving. That’s what this week has shown me.” Murray had the Beijing crowd behind him against the Austrian Thiem, ranked fifth in the world to his opponent’s 503rd. But Murray lost his first service game, putting himself under pressure immediately. At times there were shades of the Murray that topped the world rankings in 2016, but the second set started in the same way as the first, the Briton having his serve broken.

Murray, who says that he now has no pain in his hip and it is a question of building up match fitness, looked down and out as Thiem served for the match. But he does not know how to quit and a nervy Thiem surrendered his service game for 5-5. Murray went up 6-5, before Thiem forced the tie break. He carried that momentum to victory and the 26-year-old Thiem plays Karen Khachanov of Russia in the last four.