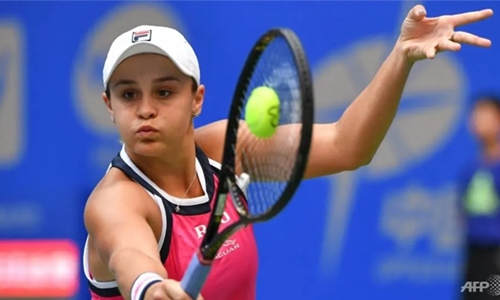 Ashleigh Barty marched into her sixth semi-final of the season yesterday, describing her victory over Petra Martic in Wuhan as one of the best matches she’s played in recent times. The world number one impressed in a highly-entertaining quarter-final that saw her fire 39 winners en route to a 7-6 (8/6), 3-6, 6-3 win against Martic.

Barty now gets a shot at revenge when she takes on powerful Belarusian Aryna Sabalenka on Friday in a rematch of their Wuhan semi-final last year. Against Martic, Barty fell behind early in the first and third sets, but retaliated with some creative shot-making to reach the last four for a third year in a row. “I think that was a very, very high-quality match. I think that was probably one of the better matches that I’ve played in recent times,” said the reigning French Open champion.

“It could have gone either way. I was happy how I was able to fight in the end, put a lot of pressure on her in a lot of those service games in the third.” Martic, the world number 22 from Croatia, had not lost a three-setter since March, but saw her streak of 16 on the trot snapped by the relentless Barty. “She’s one of the best movers on the tour,” Barty said of Martic. “That (streak) doesn’t surprise me.”

Sabalenka, the defending champion and seeded nine this week, overcame a second-set dip to halt the inspired run of Kazakh wildcard Elena Rybakina 6-3, 1-6, 6-1 yesterday. The 21-year-old is tied at 2-2 head-to-head with Barty. Sabalenka improved her strong career record on Chinese courts to 27 wins against just six losses -– including 10 victories in a row in Wuhan.