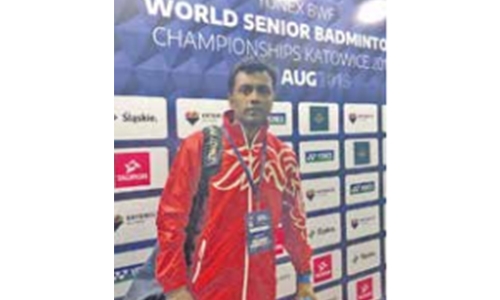 Representing the Kingdom of Bahrain, the Indian School senior Physical Education teacher CM Junith has participated in the 2019 BWF Senior World Badminton Championships held from August at Spodek in Katowice, Poland. A total of 1436 players from 55 nations had participated in the 9th edition of World Senior Badminton Championships organized by World Badminton Federation (BWF) once in two years.

Junith had also participated in the previous Senior World Badminton Championships which was held in Kochi, India in 2017. Junith has been working in Indian School Bahrain (ISB) since 2006. The Indian School Bahrain students coached by CM Junith have been winning the CBSE National Badminton championships for the past three years. ISB Chairman Prince S Natarajan, Secretary Saji Antony, EC Member-Sports Rajesh MN and Principal VR Palaniswamy congratulated Junith on his consistent performance and dedication to the sports.

The Indian School has won the CBSE cluster badminton championships for the past 12 years. The Physical Education department along with the entire Indian School fraternity feel proud of him, said HoD Saikat Sarkar. CM Junith who hails from Kerala, is a Head teacher of activity for junior sections in the Indian School.