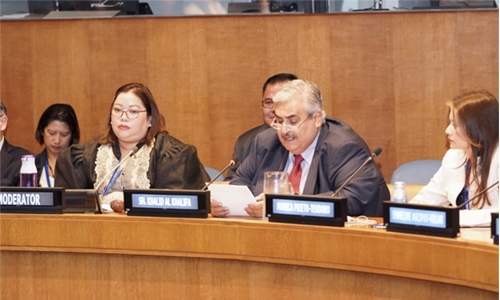 The Minister of Foreign Affairs, Shaikh Khalid bin Ahmed bin Mohammed Al Khalifa, affirmed that the Kingdom, under the leadership of His Majesty King Hamad bin Isa Al Khalifa, is committed to preserving the values of peaceful coexistence and mutual respect with the international community as part of its efforts and keenness to combat trafficking in persons, which enables it to continue its pioneering achievements in this area.

This came during the participation of the Minister of Foreign Affairs in the “Combating Trafficking in Persons in the Context of Migration: Best Practices, Challenges and the Global Migration Compact”, seminar held in New York City. The forum was organised by the Kingdom, the Republic of the Philippines and the Federal Republic of Nigeria, in co-operation with the United Nations Office on Drugs and Crime and the International Organisation for Migration.

He pointed out that these efforts and initiatives have placed the Kingdom for the second consecutive year in the Tier 1 ranking in the annual report of the United States Department of State on Trafficking in Persons, noting the role of Chief Executive Officer of the Labour Market Regulatory Authority, and Chairman of the National Committee to Combat Trafficking in Persons, Ausamah Alabsi in obtaining those achievements.

He also stressed that the exchange of successful experiences contributes to increasing the effectiveness of countering the phenomenon of trafficking in persons, especially with the adoption of the Global Agreement on Safe, Organised and Regular Migration.

He affirmed that the Kingdom will continue to work with friendly countries and the United Nations Office on Drugs and Crime and the International Organisation for Migration, through its membership in the Human Rights Council to promote efforts to eliminate trafficking in persons.