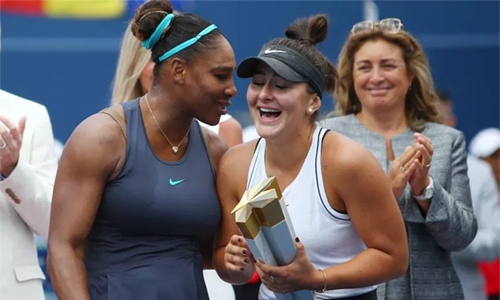 A tearful Serena Williams saw her US Open preparation thrown into disarray Sunday as back spasms forced her out of the WTA Toronto final after just four games, handing Canadian teenager Bianca Andreescu the title. Andreescu, 19, was up 3-1 with a break of serve when 23-time Grand Slam champion Williams decided she couldn’t continue. She called for a medical timeout, but within a minute, the umpire announced she was retiring.

“I just knew,” said Williams, adding she’d undergone hours of treatment before the match to combat the back spasms she’d first felt in a semi-final win on Saturday night. “I knew I wasn’t going to be able to continue.” Andreescu approached her chair, offering words of encouragement and a consolatory hug as Williams tried to fight back tears. “I’m sorry I couldn’t do it today,” Williams told the crowd, her voice cracking.

“I tried but I just couldn’t do it.” Williams said the spasms started during her come-frombehind win over Czech qualifier Marie Bouzkova on Saturday “and it just got worse.” “Just my whole back just completely spasmed, and to a point where I couldn’t sleep and I couldn’t really move,” she said. Nevertheless, she wanted to give it a go in the final.

“I don’t want to get this far and not at least try,” said the 37-year-old, who was eyeing her 73rd WTA title -- and her first since the birth of her daughter, Olympia, in September 2017. Beaten by Simona Halep in the Wimbledon final in July, Williams was playing just her 24th match of a year already disrupted by nagging knee trouble. Williams hasn’t won a title since 2017 Australian Open.