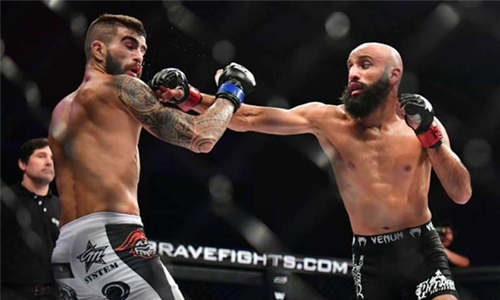 Bahrain sports will never be the same again after two of the nation’s leading sports enterprises joined forces. In a joint press conference held at Riffa Sports Club this Sunday, KHK Sports CEO and BRAVE Combat Federation president Mohammed Shahid announced that BRAVE and KHK MMA would be partnering up with the current Bahraini Premier League champions Riffa SC for upcoming season.

For Shahid, the partnership represents a new step in the development of sports in general in the Kingdom and he hopes to contribute to getting Riffa SC, also the current King’s Cup champions, much-deserved international awareness, and recognition. “The vision of developing all sports and taking that development to the next level started with MMA. Now, we are all very grateful and thankful to His Highness Shaikh Khaled bin Hamad Al Khalifa for expanding that vision into KHK Sports, and other ventures.

We are taking things to the next level to bring the economic factors and international recognition to Riffa Sports Club and to Bahraini football as a whole. This is a club with deep history, we are all supporters of Riffa SC, now more than ever. We look forward to help with the building of more champions”, said Shahid, who described the partnership as record-breaking and breathtaking, a view that has been shared by everyone involved.