Kyrgios triumphs in Washington | THE DAILY TRIBUNE | KINGDOM OF BAHRAIN 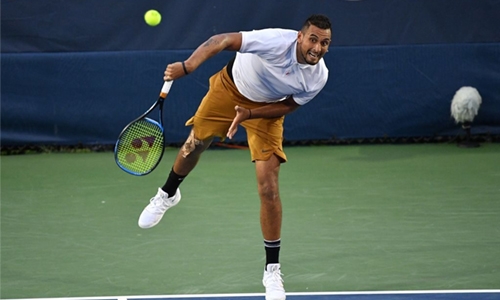 Shaking off back spasms to blast 18 aces, Australia’s Nick Kyrgios kept his composure and captured the ATP Washington Open title Sunday, defeating Russia’s 10th-ranked Daniil Medvedev 7-6 (8/6), 7-6 (7/4). The 24-year-old Aussie, who struggled through the opening set, claimed the $365,390 top prize and his sixth career ATP crown at the US Open tuneup event. “This is probably my best memory of a final,” Kyrgios said.

“I left it all on the court.” Kyrgios, 5-1 this year against top-10 rivals, won his second title of the season after Acapulco in March and will jump 25 positions to 27th in yesterday’s new rankings, his first top-30 appearance in 43 weeks. “This has been one of the greatest weeks of my life. I’ve made massive strides,” Kyrgios said. “This whole week has been amazing. It’s a week I won’t forget.” Known for his fiery temperament and inconsistency, Kyrgios was resilient all week, breaking racquets but holding his emotions together -- “super proud” of his composure.

“In the past six months, it’s crazy to think how much I’ve been able to turn it around,” Kyrgios said. “I’m working hard to be better as a player and a person. “I lost faith that I could still have weeks like this and be happy. I’ve got to thank (my family) for not losing faith. “I just wanted to clean myself up and have a healthy attitude. I showed what I can do this week.” While saying his best memory of the week was “how professional I was off the court,” Kyrgios also noted, “I’ve got a long way to go.”

Medvedev, 23, was broken only twice this week but lost his lone sets to Kyrgios. He’ll equal his career-best ranking of ninth yesterday. “I know how well Nick can play when he wants to play. This week, I think he wanted to play and it was tough,” Medvedev said. “He was determined and it seemed like he wants to win. And that’s what we don’t see all the time.”