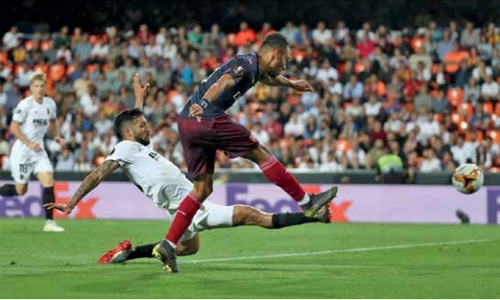 Arsenal will play Chelsea in the Europa League final after a Pierre-Emerick Aubameyang hat-trick ended Valencia’s hopes of another dramatic European comeback on Thursday. Trailing 3-1 from the first leg, Valencia made the perfect start at Mestalla when Kevin Gameiro finished at the back post but goals from Aubameyang and Alexandre Lacazette left the home side needing four in 40 minutes. Gameiro scored again, sparking hopes of a revival to trump even the efforts of Liverpool and Tottenham this week, before Aubameyang hit his second and then completed a brilliant hattrick to seal a 4-2 win, 7-3 on aggregate.

There will be a London derby for the final in Baku on May 29 and, for the first time in history, four English teams competing in both the Champions League and Europa League finals, with Liverpool and Spurs meeting in Madrid three days later. It also keeps alive Arsenal’s chance of securing a place in the Champions League next season and, realistically, their last chance, given they need to overturn three points and an eightgoal swing on Tottenham in the Premier League this weekend.

“We couldn’t get the Champions League through the league, but this is another way,” said Arsenal coach Unai Emery. “Our objective is clearly to go to the Champions League but also this is a trophy. It will not be easy.” Valencia had been relying on the Europa League for Champions League qualification too, given they sit three points behind Getafe, who face a demoralised Barcelona on Sunday, with two games left in La Liga. But over the two legs, Marcelino’s side could have few complaints.

They were second best at Emirates Stadium and defensively frantic here. Arsenal, usually so fragile away from home, picked them off with ease as Aubameyang and Lacazette, boasting 48 goals between them this season, proved themselves to be a first-class attack in a second-tier competition. “Auba was unbelievable tonight,” Lacazaette told BT Sport. “Congratulations to Arsenal,” said Marcelino. “They had a bigger punch.”

There will also be no Spanish team in either European final for the first time since 2013, and only the second time in 10 years. Valencia made a brilliant start as Jose Gaya headed wide at the near post and Goncalo Guedes fired over, with Petr Cech playing for time as early as the fifth minute in the hope of a chance for breath.