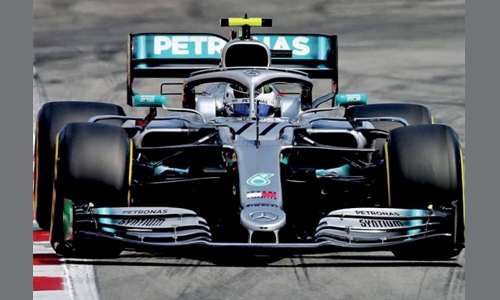 Valtteri Bottas and Lewis Hamilton looked poised to extend their dominance of Formula One after clocking the fastest laps in practice for the Spanish Grand Prix yesterday. Ferrari fast-tracked a new engine and brought in other updates during the two-week break since the Mercedes pair claimed their fourth consecutive onetwo finish in Azerbaijan. But Hamilton and Bottas were still faster than their Ferrari rivals. Bottas posted the top times in both sessions under sunny and warm conditions at the Barcelona-Catalunya Circuit, lowering his own mark from the morning session.

Five-time and defending champion Hamilton was a sliver behind, at 0.049 seconds slower. Charles Leclerc had the third best time in his Ferrari, followed by teammate and former champion Sebastian Vettel. More menacing for Ferrari is that Vettel and Leclerc were faster than Hamilton and Bottas in practice at Azerbaijan, only to finish behind them both on race day. Ferrari team principal Mattia Binotto said even though his team is struggling to catch Mercedes they aren’t giving up. ‘’Certainly we are not happy for the points we have scored so far,’’ Binotto said.

‘’We’ve still got a good car. The competition is very strong, which is not a surprise. But we are still in the battle.’’ Bottas leads defending champion Hamilton by one point overall. Vettel is 35 points behind Bottas in third place. Hamilton has won the Spanish GP three times, including the last two years. Ferrari and the rest of the field could take a glimmer of hope from Bottas having to box for an apparent leak and Hamilton telling the team radio at one point that he was ‘’struggling.’’ Otherwise, Mercedes appears ready to extend its record start for a two-car team in F1 after sweeping the first two spots in all four races. Max Verstappen had the fifth best time despite losing time due to mechanical issues with his Red Bull.

The young Belgian also provided a scare to Bottas in the morning, when Verstappen flew through a curve and almost rammed into the Finn. Verstappen slammed on the brakes in time, before shaking his fist at Bottas. Verstappen, the only nonMercedes driver to win the Spanish GP in the past five years, had to come into the garage for an apparent leak. He also complained later he was losing power when he tried to accelerate. The first session ended under a red flag after Lance Stroll clipped some grass, lost control and plowed his Racing Point into the barrier.

Stroll walked away and was back out on the track once team mechanics patched up his crunched car. As for the lowly Williams, it seems there is no relief in store after Robert Kubica and George Russell finished at the bottom of the time sheet, around three seconds slower that the pacesetter. Kubica did do well to keep his car off the wall when he went off course early in the afternoon session. There will be a third practice on Saturday before qualifying. The race is on Sunday.