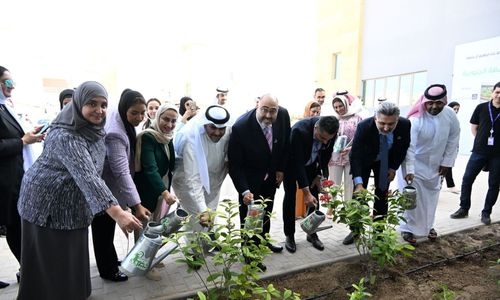 Bahrain Islamic Bank (BisB), the leading provider of digital banking services in the Kingdom of Bahrain, announced its support for the second phase of the national afforestation campaign.

Launched in October 2021 under the slogan “Forever Green”, the campaign is held under the patronage of Her Royal Highness Princess Sabeeka bint Ibrahim Al Khalifa, wife of His Majesty the King of Bahrain, President of the Supreme Council for Women (SCW) and Chairperson of the Consultative Council of the National Initiative for Agricultural Development (NIAD), in cooperation with the Ministry of Municipalities Affairs and Agriculture and the Supreme Council for Environment (SCE).

With more than 70 trees and shrubs, the tree planting ceremony took place at the Shaikh Abdulla bin Khalid Al Khalifa Health Center at 11:00 am, Tuesday, in the presence of Shaikha Maram bint Isa Al Khalifa, the Secretary-General of NIAD, Dr Lulwa Showaiter, Acting Chief Executive of the Primary Healthcare Centers, Yaser Alsharifi, Chief Executive Officer of BisB, alongside several volunteers from BisB’s Team Jood, and a number of the Bank’s employees from various departments.