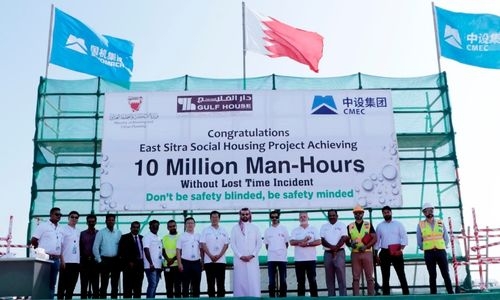 The project implemented by the Bahrain Housing Ministry has China Machinery Engineering Corporation as the main contractor.

The project started in March 2021 and has achieved ten million safe manhours since then.

During the opening ceremony, the ministry emphasised the importance of safety during the successful implementation of the project and stated the achievement of 10 million LTIfree manhours brings a sense of pride at the same time it brings a huge responsibility going forward to maintain it and aim higher.

The CMEC Management stated during the event Safety is the Core Value of the business and is being treated all above.

“The safety/ health and welfare of the workers remain the highest priority for the project and will continue to maintain and improve it.

“During the event, the workers were awarded for their remarkable behaviour in achieving this milestone.

The credit for this achievement goes to every single person involved in the ESHP project.”