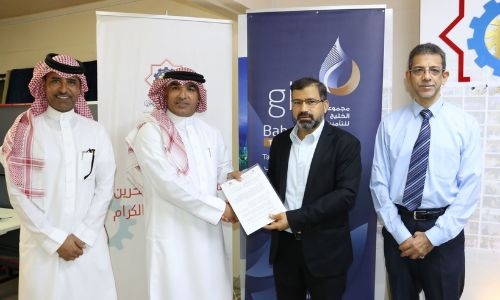 The agreement was signed by the Chief Executive Officer of the company, Essam Mohammed Al-Ansari, and the Secretary-General of the Federation, Abdulqader Al-Shahabi. Essam Al-Ansari stressed the company strives to develop its products and services, as the continue to enhance the channels to reach its customers, especially through digital means, expanding on the range of services provided electronically through its recently updated mobile application.

He also indicated the company’s goals towards contributing to alleviating the financial burden of workers, members of unions affiliated with the General Union and members of the National Committee for Retirees. From his side, the Secretary-General of the General Union, Abdulqader Al-Shahabi, affirmed his wishes that the agreement would include a health insurance agreement, especially with the work progress to improve the health sector.

And provide various services that contribute to raising the standard of living for workers who are members of the General Federation of Bahrain Trade Unions. It’s worth noting that Takaful International Company is the first Islamic Insurance Company in Bahrain. It was established in 1989.

Employee accidentally gets paid 286 times his salary; resigns and disappears in Chile